Satoshi IKEUCHI, Professor of Religion and Global Security at the RCAST, U-Tokyo, Japan 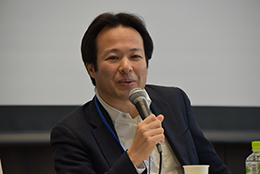 Satoshi IKEUCHI, Professor of Religion and Global Security at the Research Center for Advanced Science and Technology (RCAST) of the University of Tokyo, Japan

He established Religion and Global Security Division at RCAST, the University of Tokyo in 2018 and became its division head. He was an Associate Professor of Islamic Political Thought at RCAST for ten years since 2008.

As one of the leading public intellectuals in Japan he has been vigorously publishing and commenting on the Middle East and Islamic affairs and its relationship with Japan.

His weekly commentaries on security relations between Japan and the Middle East appears on Dubai-based Arabic newspaper Alroeya.

He was a visiting scholar at the Woodrow Wilson International Center for Scholars in 2009 and Visiting Fellow at the Clare Hall, University of Cambridge in 2010.

He is a non-resident scholar affiliated with the Strategic Studies Implementation and Research Centre of the Başkent University (BAŞKENT-SAM) in Ankara, Turkey.

His concise history of the Islamic State titled Isulamu Koku no Shogeki (The Shock of the Islamic State, Tokyo, Bungei Shunju, 2015) became one of the nation-wide best-selling books of the year in Japan. He was awarded Mainichi Publishing Culture Prize for this book in 2015.

For his overall achievement, he was awarded Nakasone Yasuhiro Prize in 2016.

In his pastime he also a cultural-social critique and his compilation of book-reviews Shomotsu-no Ummei (The Fate of Books, Tokyo, Bungei Shunju, 2006) was selected Mainichi Book Review Award in 2006.