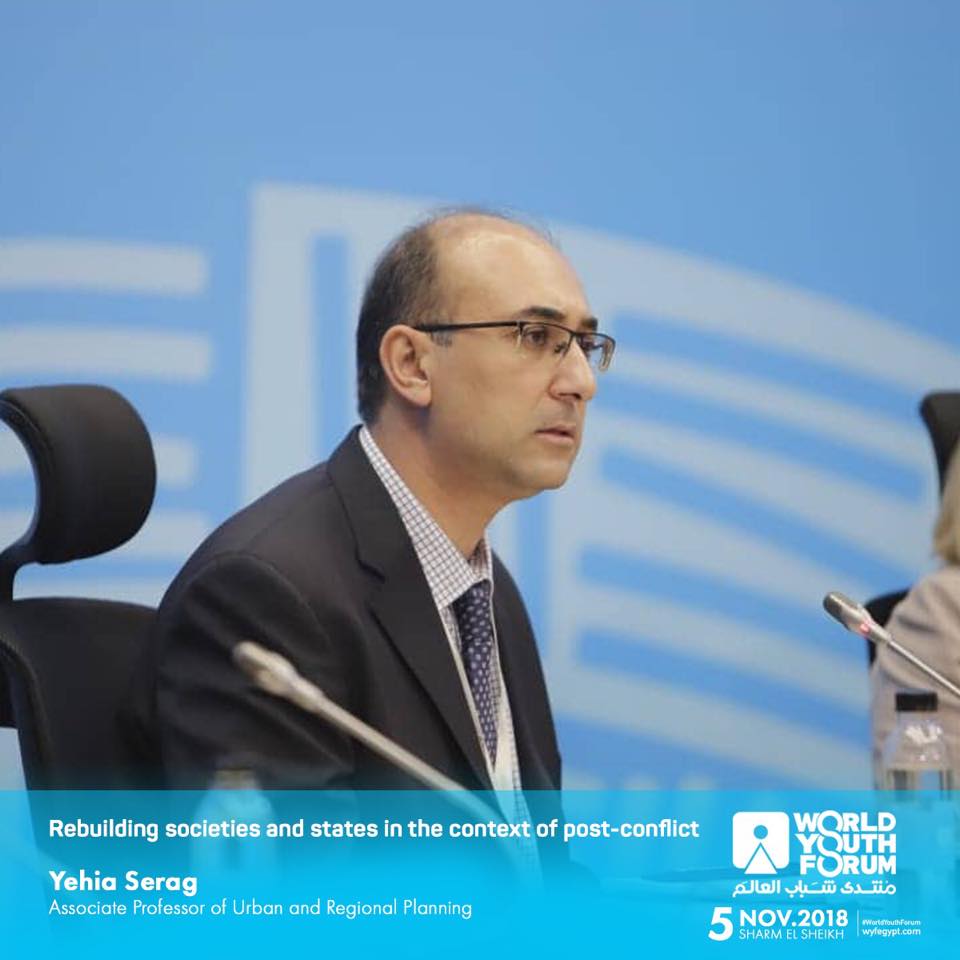 Prof. Dr. Yehya Serag is a professor of urban and regional planning in Ain Shams University in Cairo. He is also a regional and urban planning consultant with about 20 years of academic and professional experience. Since the beginning of the so called ” Arab Spring revolutions”, Prof. Serag has been interested in studying and analyzing the impacts of politics on urbanism and the built environment. Among his interests in this field: city transformation as a result of war or revolutions, urbicide: the deliberate destruction of cities and its causes, and post war/conflict reconstruction strategies. He academically worked with several students from Syria, Iraq,  Egypt and Palestine in research topics related to the previous field. Professionally, Prof. Serag is a partner in the Engineering Consultant Office for Planning and Architecture, through which he was involved in the regional planning of one of the Egyptian border regions with Sudan, setting a proposal for regional development to the Darfur region in Sudan, as well as many strategic and structural city planning projects. He is also a member of the Regional Studies Association in the United Kingdom, as well as being one of its representatives in Egypt.

Most recently Prof. Serag co-founded together with a group of consultant offices and individual consultants the “Alliance for Post-Conflict Reconstruction (APOCOR)”. The members of APOCOR are of different nationalities including Egypt, Lebanon, Iraq and Germany; and with different backgrounds and specializations including urban planning, Architecture, Remote Sensing, Civil Engineering and Finance. The group has adopted a methodology for post-conflict reconstruction and aims to apply it in actual project in the post-conflict cities of the Middle East.

Prof. Yehya Serag is also a member at the Academic & Research Board of the Institute of Global Security & Defense Affairs (IGSDA)

Highlights on the most recent Related Activities

2018- Urban Planner on the move: Lessons learned from cities of post war reconstruction, (coauthor), paper published in the proceedings of the Post War Reconstruction of Iraq and Syria conference, Baghdad, Iraq.

2018- Towards an appropriate regional development approach for developing the Halayeb – Shalateen border region in the South East of Egypt, paper published in the proceedings of the Urbanism at the Borders conference, Robert Gordon University, Aberdeen – Scotland – UK

2016- Waves of displacement in Egypt: Impacts of the internal and external displacement waves on the Egyptian cities, presentation published in the proceedings of the Regional Studies Association Annual winter Conference, London – UK, November 2016.

2016 – The Blessings of „Non-planning‟ in Egypt, Serag, Y. And AbdelWahab, M. in Strategic Planning: an international perspective, eds: Albrechts, L, Hillier, J and Balducci, A. , Taylor and Francis.

2015 – Impact of Politics on the Planning of the new city of Toshka in Egypt, paper published in the proceedings of the AESOP 2015 conference, Prague, July 2015.

2013 – Nubian Resettlement Challenges Between past memories and present settings, paper published in the proceedings of the SB13, Cairo, November 2013.

2013 – The Haussmanization approach From a counter revolution urban fabric to a success factor for the Egyptian revolution in Cairo , paper published in the proceedings of the SB13, Cairo, November 2013.

2011- From Social Networking to Political and Physical Impacts: Some Lessons from the Egyptian Lotus Revolution, paper published in the proceedings of the Regional Studies Association Annual Conference, New Castle– United Kingdom, April 2011.

2010- Border settlements in Egypt, between trans-border cooperation and defending the sovereignty of the country, paper published in the proceedings of the Regional Studies Association Annual Conference, Pecs – Hungary, May 2010.