Is It the Time For Egypt’s Fourth Strategic Direction? 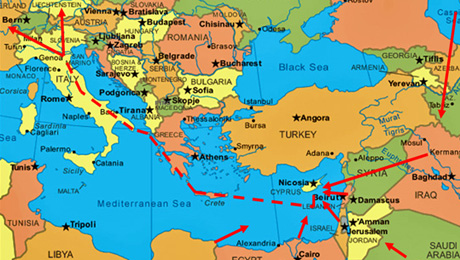 The Pillars of Egypt’s Strength

This is not my first time to write or talk about this topic due to its importance from my own perspective. Egypt is country that enjoys a distinguished geopolitical position which provides potentials that make Egypt a semi-permanent element in the formulation of regional and international politics in war and peace times.

Its African Asian linkage has granted Egypt a special status in the world and made it a pivotal country between the Middle East and North Africa regions; in addition to overlooking the Mediterranean Sea and the Rea Sea, the most two important seas.

In my estimate, the Egyptian role is based on seven main pillars of strengths as next:

Whenever attempts are made to marginalize Egypt and ignore the pillars of its strength, someone comes and shakes all of that off restoring its strength and its power to quickly resume its effective role. This is noticed throughout the ages, from the times of ancient Egypt to the Alawite Dynasty, where they find themselves settled and ruled; discovering that Egypt has the keys to all its surrounding regions.

Therefore, Egypt is regarded a safety and security valve for Europe, North and East Africa and the Middle East. It combines the fact that it is a state of common interests and blockage of harm. Egypt is a barrier to the cancerous expansion of terrorism since many efforts are being made to shrink it and stop its progress towards North Africa and the Eastern Mediterranean. On the other hand, Egypt is working to embrace the refugees and prevent their flow to the north and to the west. A new important zone is added to the area of Egypt’s security interests that is the natural gas-rich offshore region of the Eastern Mediterranean.

In an introduction entitled “Egypt’s Strategic Keys”, which topped his famous book “Sinai in Strategy, Politics and Geography,” Dr. Jamal Hamdan says “However, Egypt’s strategic pillars are not complete unless we consider the parties of the micro-globe does not connect the basic body to the surrounding outside world: Sinai in the north-East, Marmarica in the North-West and Nubia in the South. Each of which is a gateway to Egypt. “

Dr. Hamdan also says “But these gates vary to the maximum in their importance and strategic risk. We may express this disparity as an immediate and costly expression if we consider Sinai as the front gate, Marmarica its side gate, and Nubia the rear gate”.

The Sinai Peninsula is described by Dr. Gamal Hamdan as the “front gate of Egypt” is the north-eastern part of the Arab Republic of Egypt and is adjacent to the land border with the Gaza Strip and Israel. It also overlooks the south of the Gulf of Aqaba in its territorial waters with Saudi Arabia, Jordan and Israel and the Gulf of Suez within the Egyptian borders.

Nubia is, the southern gateway to Egypt, is in the far south of Egypt. Currently, it is the area that includes southern Egypt and northern Sudan along the Nile River

In the north-west we find Marmarica “the side gate of Egypt,” as described in the words of, Dr. Gamal Hamdan, “Marmarica Mariout is choked between the sea and the Qattara Depression at the Ruwaisat Plateau and the area of El Alamein to compose a compose a straight very much like a neck and is considered one of the most dangerous and fortified entrances”.

During my first academic/ research interaction with NATO at a Conference on Marine Energy Security held in the first week of June 2015 at the NATO Maritime Interdiction Operations Training Center (NMIOTC) on the Island of Crete in Greece, the Focus of the conference has been on energy security in the marine environment in “Eastern Mediterranean” region since it is one of the most important and dangerous zones of potential international conflicts.

Since that time, I have given a special interest, from my viewpoint, to what could be called “Egypt’s Northern Strategic Direction” that has to be expanded to the farthest range of the vital northern sphere of the country. It has to extend to cover the economic territorial water of Egypt since it is a considered as a zone that carries within it a direct and sever impact on the side gate of Egypt and its strategic keys which are not exclusive to Port Saied and Alexandria. the gate my extend to more main cities to the East and the West on the Mediterranean.

During several international meetings, I have pointed out the importance of this direction in all areas of the national security of Egypt and its coastal neighbors as well as the countries of South-Eastern Europe bordering the Mediterranean Sea. I have always recommended the importance of raising the level of coordination and partnership with the countries of Europe and the Eastern Mediterranean; especially with the increase of common strategic objectives to be secured in the Eastern Mediterranean. Such objectives are not limited to the protection of economic resources and the fight against terrorism; but they may extend to several interests in various other areas.

From a geostrategic angle, Egypt has been one of the seven Mediterranean Dialogue countries since 1994. I think that Egypt, until recently, has not used this partnership well compared to four Gulf states (the UAE, Kuwait, Bahrain and Qatar) who have entered into a partnership with NATO through the so-called “Istanbul Cooperation Initiative”; 10 years later than Egypt.

However, these countries have made significant gains from this cooperation to an extent that may reach the level of decades of cooperation. Every political or military planner know that the Egyptian coast from Rafah to El Salloum is considered the largest and most cohesive coast in the southeastern Mediterranean if compared to the Turkish coast in the north-east of the Mediterranean, especially with the changing map of alliances and the conflicting prospects for the future of Turkey’s membership in NATO.

The “Strategic Direction” includes areas of responsibility that must be secured against all expected threats and risks emerging from the outside or inside. The “Strategic Depth” may be within or outside a state represented in a certain country or other surrounding countries to guarantee the security of each and every one of them or achieve mutual security between the country and the other countries that represent that “strategic depth”.

The Fourth Strategic Direction is to Ensure Egypt’s National Security

Economically, the seas have the most important natural resources, and they pose as a commercial and economic gate to the countries overlooking them and make them open to all parts of the world and hence achieve real political and security influence. Therefore, I imagine that the current and potential circumstances may require the inclusion of the “Eastern Mediterranean” as the fourth strategic directions of Egypt as it is the “Northern Strategic Direction” and all the necessary procedures should be taken to fulfil that consideration.

In parallel with the development of the Sinai Peninsula, I see the need to develop the northern coast from Port Said in the east to El Salloum in the west while adding special emphasis on the uninhabited areas therein. I Also see the need to activate the standing Egyptian regional and international partnerships on the North Strategic Direction while building new ones. Such a step is considered as a large reinforcement to this very important direction. Moreover, within the framework of the full representation between NATO and Egypt, which is an important development in the nature of the partnership between Egypt and NATO, I propose the maximization of the cooperation between them to reach the same size of cooperation with the countries of the Istanbul Initiative (including four gulf states) and even increases phase by phase.

In order to maximize the cooperation and partnership between Egypt and NATO, academic cooperation can be developed to be between the top specialized civilian and military academies in Egypt and the NATO. The scope of cooperation can include research and training fields, as well as informatics in the fields of combating terrorism, violent extremism, irregular migration and transnational crimes.  Information cooperation can be enhanced through the information collection, analysis and strategic Studies Center; newly established in NATO Joint Allied Force (JFC) Naples and known as the NATO Strategic Direction South the “Southern Hub”.

I believe that the Egyptian foreign policy approach towards the concept of “alliances and international partnerships” is developing compared with before, but slowly. The conviction of the decision-makers with the need to work within regional and international objectives and interests; whether common or reciprocal in the real sense is always a necessity. This is achieved by accurately defining the Egyptian strategic objectives on the regional and international levels and determining who can achieve them with Egypt and those who cannot. It is also important to identify those who might try to impede the attainment of these objectives. Accordingly, and based on several other bases and considerations, build alliances and partnerships are to be built according to what Egypt needs.

From that point on, the shift from fearing and distrusting the other, to the state of confidence, stability and ability to powerfully exist on the international diplomatic and regional arena, which is considered as one of the four pillars of the stable state, not the fragile state.

The most surprising question I have ever received specially from people who believe in conspiracy is “Do you think the United States, Europe, China or Russia are working for the benefit of Egypt?” My direct answer is “Why should any country work for the benefit of another? The suitable answer that reaches my mind immediately comes in shape of another question “Is Egypt a minor holding his lunch box and school bag and in need of a custodian to protect it and work for its benefits?! “Of course not. partnerships and alliances are built on the extent to which their members well-recognize their goals, interests and challenges; besides their awareness of the interests and challenges of their allies too, even if they are former enemies, and how to focus efforts to achieve their common interests.

Japan and the Security of SLOCs in the Middle East