Fingers Are On The Triggers is a new book authored by Dr. Sayed Ghoneim in English language as an Egyptian’s perspective of the Middle East, keeping up with events till mid-2021. It’s edited by David Willis from UK and published by Andromeda Publishing and Academic Services, UK.

The book is based on Dr. Ghoneim’s Ph.D. political science thesis titled ‘National Security Strategies of Superpower Countries and Their Expected Impacts on The Regional Security of The Arab Region’, which he submitted and successfully defended at the University of Port Said, Egypt, in October 2020. The book was also published in Arabic in February 2021 and it is being translated into the Chinese language by the China-Arab Forum for Reform and Development (Shanghai). It is also being translated to Japanese language edition (in four parts) in 2021/2022. It’s also planned to be published in Spanish language in 2022 by the Defense University of Honduras.

To know more about the author, please follow the link: https://igsda.org/team/sayed-ghoneim/

Both the book and the doctoral thesis were prepared from the results of very productive series of seminars and discussions organized and chaired by Professor Satoshi Ikeuchi, Professor of Global Security and Religion at the Research Center for Advanced Science and Technology (RCAST) of the University of Tokyo, discussing with Dr. Sayed Ghoneim his thoughts ideas, when he was representing the Institute for Global Security and Defense Affairs (IGSDA-Online) during the seminars in Tokyo and online.

The academic and research partnership between the two parties contributed much to developing an objective analysis of current events and a logical anticipation for the future of the Middle East region at the political and security levels. This huge joint effort also supported the discussions in which Dr. Ghoneim participated while lecturing at other research and academic bodies in Japan, NATO, the European Union, the US Central Command, the Belgian Military Academy and the strategic studies centers in Beijing, Shanghai, Seoul, Taiwan, Tegucigalpa, and the Middle East itself. The new edition of the book in the Japanese language will be developed with important updates regarding the Horn of Africa and the Red Sea region.

“Fingers Are On The Triggers” is an Egyptian’s Perspective of the Middle East published in English language, showing different analysis of events following the Arab Spring revolutions and a future perspective.

This book is published in a very critical time, as the region is in the midst of competition for influence by a range of international and regional powers in the Middle East. The book analyzes important political events during the past decade and it provide an objective and clear-eyed look at the next decade.

The book answers several questions that concern everyone interested in the Middle East, such as;

The author of the book has not neglected an attempt to anticipate the future of the region, giving his views on the expected changes to the strategies and policies of the active parties in the region, as well as examining their regional interactions.

In answering these questions, the book presents its propositions in three main time frames. The first covers the period 2011-2017, from the Arab ‘spring’ and its repercussions until issuing President Donald Trump’s National Security Strategy document in December 2017. The author reviews the national security strategies and the related policies of the United States, the Russian Federation and China as the three main poles of competition in the world, as well as those of Israel, Turkey and Iran at the regional level. He then reviews the international and regional rivalry between the three regional powers as well as Saudi Arabia, the Emirates, Qatar and Egypt as the active Arab countries in the region before ending with a clarification of the challenges consequent upon the strategies and policies of the great and regional powers in the context of new security dynamics.

In the second timeframe, the period 2018-2020, the author explains the most important international and regional developments that have affected the security dynamics in the Middle East region until Joseph Robinette Biden Jr. assumed the presidency of the USA and just before issuing his first strategy paper, ‘Interim National Security Strategic Guidance 2021’. This acts as a transitional phase to the third time frame, which extends over a decade from 2021 until 2030 and is an attempt to anticipate regional and international transformations and the expected impacts on the regional security of the Middle East as a future prospect.

The book is useful for decisionmakers and policymakers and diplomats, as well as academics, researchers, graduate students and university students because it is an updated reference that includes documented information in the fields of political science and national security in the Middle East region. It also useful for analysts, writers and journalists, in addition to all those interested in political and security affairs in the region.

Contents of the book

The book is divided into four parts, preceded by an introduction and ending with the references as follows:

Part I: Maneuvers of the Great Powers “The National Security Strategies of the United States of America, the Russian Federation and the People’s Republic of China”

Part IV: Players and Theaters: The Middle East, Where To?

Details of contents are in the images below.

How to get the book? 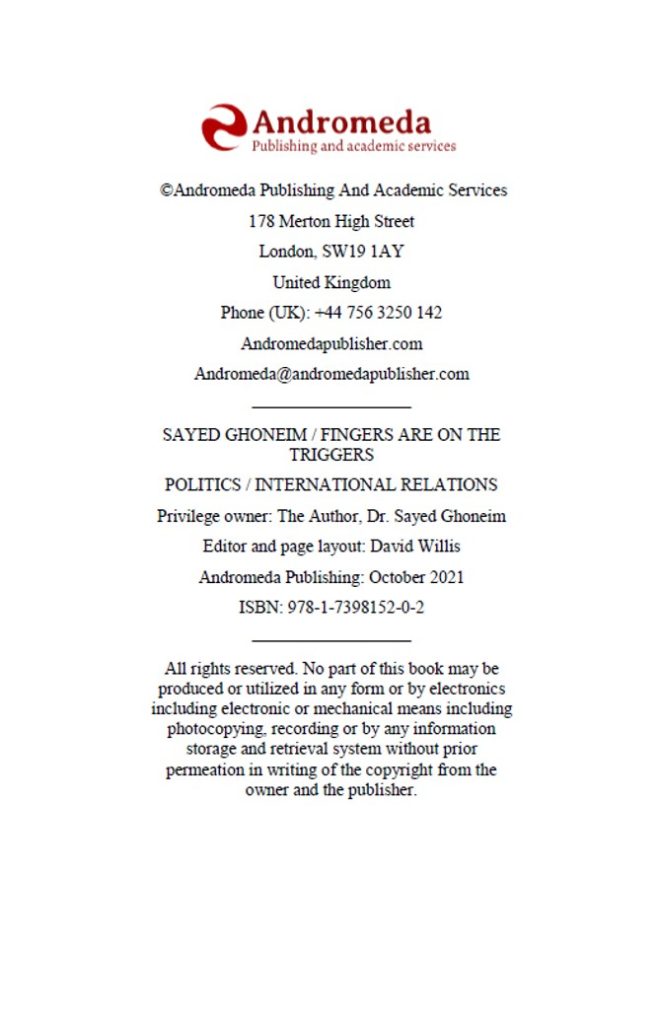 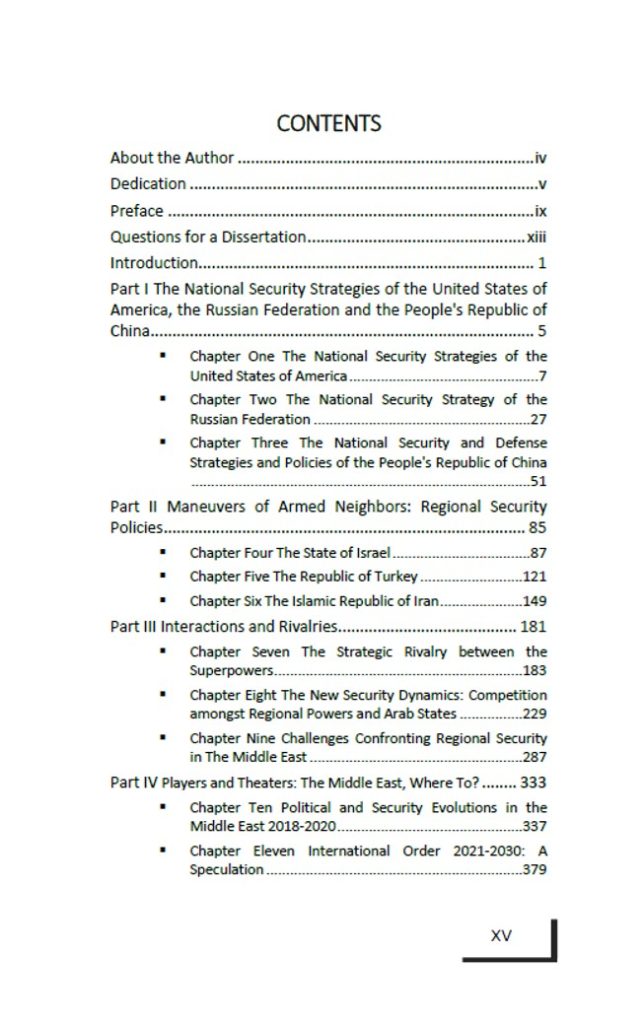 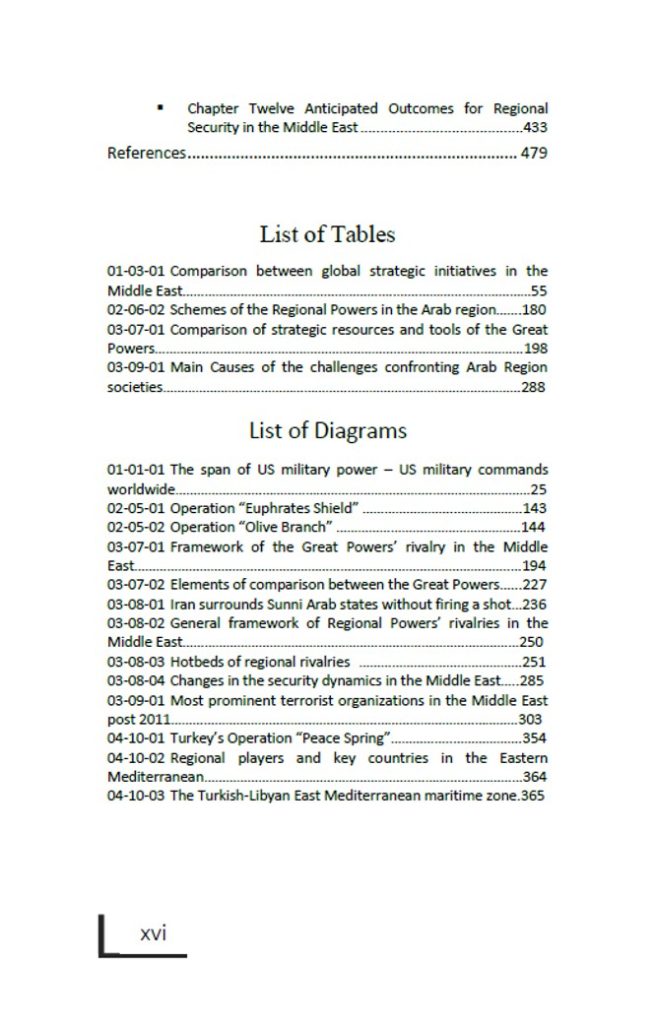 Paradigm Changes under the COVID-19