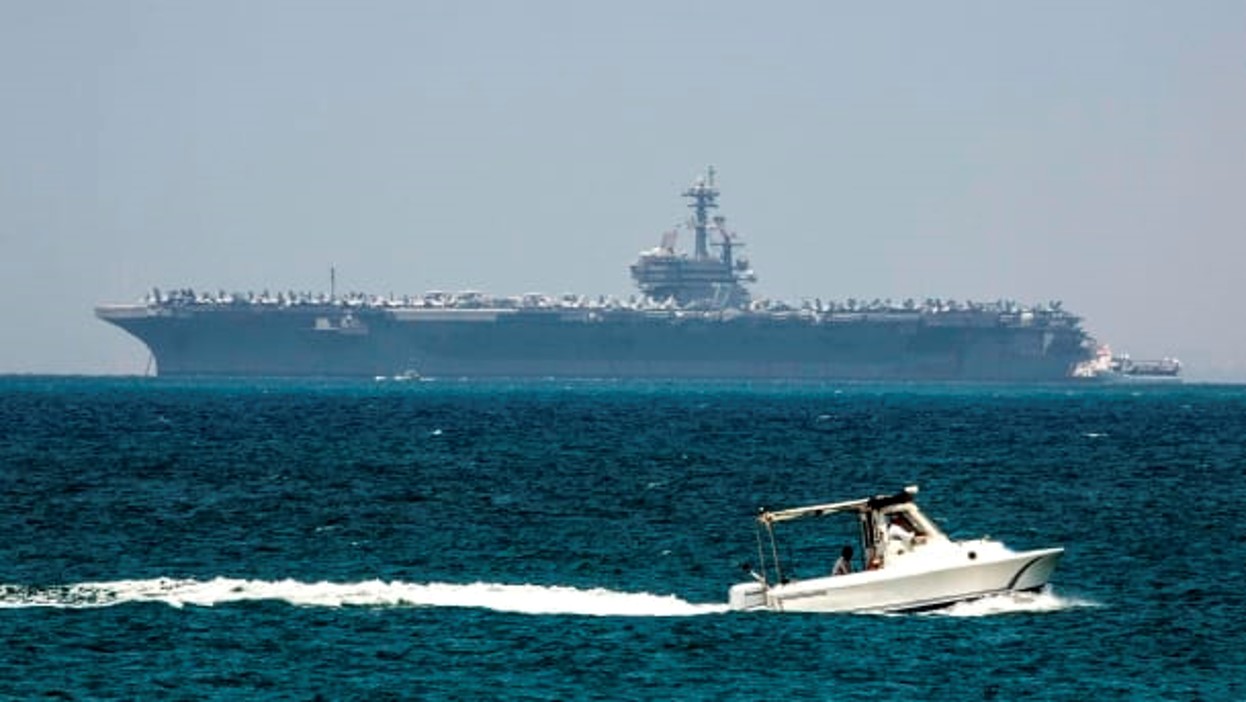 USS George H.W. Bush, which was previously deployed in the Persian Gulf, is staffed with 5,700 crew members and dozens of aircraft

An American aircraft carrier, the USS George H.W. Bush, docked in northern Israel on Saturday. It has been deployed in the region as part of the U.S.-led coalition’s fight on ISIS. This is the first time in 17 years that such a vessel visits the country.

Prior to arriving at Haifa’s shore, the ship was deployed at the Persian Gulf before crossing the Suez Canal. It has been involved in the fight on ISIS since the beginning of the year.

The USS George H.W. Bush is considered to be among the world’s most expensive weaponry, with construction estimated at more than $6 billion. It is staffed with a crew of about 5,700 sailors and pilots and carries dozens of aircraft, including warplanes, helicopters and drones, as well as other weapons.

Prime Minister Benjamin Netanyahu and U.S. Ambassador David Friedman will tour the USS George H.W. Bush together on Monday. Senior Israeli defense officials are slated to visit the warship as well, and U.S. naval commanders will visit the shore. The press will be given a tour of the carrier on Monday too.

Earlier this week, a joint drill took place during which Israeli helicopters practiced landing on board the warship, the IDF said in a statement.

The Israeli navy’s cooperation with foreign militaries has increased after the U.S.-led coalition began its war on ISIS. According to a naval officer, dozens of ships have docked in Haifa in recent years, coming from the U.S., U.K., France and India. The American warship’s arrival is nevertheless unusual due to its large size and the scope of the aircraft it carries.

The USS George H.W. Bush will remain in Israel until Wednesday, meaning that the crew will be marking America’s Independence Day in Israel.

Due to its massive size – the ship is 1,092 feet (333 meters) long – it is too large to dock in Haifa port itself. As a result, the crew will be brought on shore by ferries. They will then have dozens of buses at their disposal to give them an opportunity to tour the country, local media said.

In the 1980s and 1990s, the U.S. Sixth Fleet had a home base in Haifa. The city was eliminated as a port of call in 2000 with the outbreak of the second intifada. No aircraft carrier visited Israel since.

The IDF said in a statement that “the aircraft carrier’s arrival is an expression of the ties between the armies and the states, and expresses the commitment to Israel’s security.”

Adm. Michelle J. Howard, commander of the U.S. Naval Forces Europe-Africa, said in a statement that “In this visit to Israel, GHWB’s might is a metaphor for the strength of the bonds between our counties.”