Qatar, the 39-year-old State, has a geopolitical location in the eastern part of Saudi Arabia. It’s located Southern of Bahrain, Northern of UAE and Western of Iran. It owns most of “the North Field” and the remaining small part is owned by Iran.

As a result, we may conclude the next:

Accordingly, Qatar felt that it’s an easy target that could be swallow the giant “Saudi Arabia”.

As a reaction, this has led Qatar to start improving its political and social relations with Iran to secure its economic interests with it, and to secure its eastern back-front as a port of Gulf ambitions, especially Saudi Arabia. There are already security agreements between Qatar and Iran in (combating crimes, counter-terrorism and securing the maritime coasts), these agreements angered the three surrounding GCC countries. 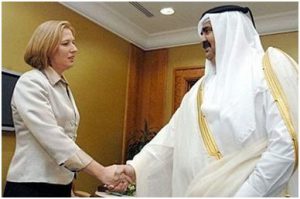 On the other hand, Qatar has considered winning international and regional allies is a must, that can achieve the necessary political and security guarantees to protect it when necessary. I see that Qatar adopted and adopted and develop a genius strategy that can carry out its mid and long term strategic.

Qatar has become a strategic ally of Israel (the most important ally of the U.S.); bearing in mind that Israel (according to its strategy) plans to be the backbone of the region). Qatar also became a strategic ally of Turkey (the most important military force in the region and the second largest military force in NATO). On the other hand, Qatar thought of how to guarantee more pressure on the three surrounding GCC states, and it fount the best tool of that; it’s “Muslim Brotherhood organization – MB”. 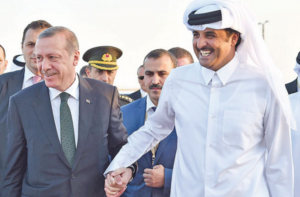 The MB, representing political Islam, was chosen as the best political alternative to the rulers of the Arab states, which was initially warmly welcomed by the U.S. but not the same by Israel’ however, it met the Turkish political support which urged Qatar to support it with finance and soft power. Remember how relation after Arab Spring specially in 2012 and 2013 was good between MB Governments in MENA, Qatar, Iran and the U.S., in the meantime Saudi Arabia, UAE and Bahrain rulers were very angry.

The aim was simply to put a permanent pressure by the new extended MB governments of the Arab states on the GCC states. This may lead to change the GCC states’ rulers in the future, which is in favor to Qatar.

I may summarize this well-studied strategy, that expresses strong steps of regional security, political and economic relations with Iran, Turkey and Israel, and strategic international relations with the U.S., imposing the Muslim Brotherhood to rule the Arab countries putting pressure on the surrounding GCC states on one hand, and to possess the monopoly of the sale of gas to Europe in state of Russia and the Mediterranean countries on the other hand.